Share All sharing options for: Larry Johnson: "I'm going to kill your boyfriend."

Larry Johnson allegedly said those words to the woman who filed the police report about the recent incident that's been widely reported. H/T to KMBC for the incident report (Click the image for a larger version and click here for the PDF version of the police report). 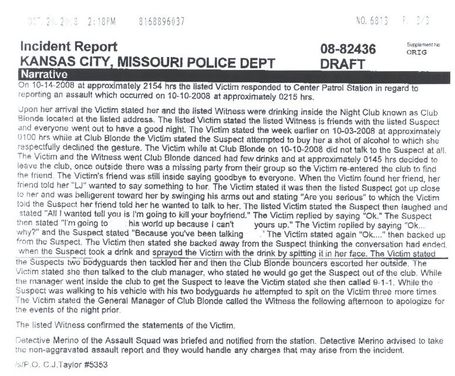 The listed Victim stated the Suspect [Larry Johnson] then laughed and stated "All I wanted to tell you is I'm going to kill your boyfriend."

The story doesn't end there. Larry Johnson says he's "going to kill" the boyfriend because the victim had "been talking." After that threat was made, apparently Larry Johnson spit a drink in the victim's face and his bodyguards escorted her outside. When Larry Johnson was walking to his vehicle, the report states that he then tried to spit on the victim three more times.

If this is true, if it is, this is truly despicable behavior by a Kansas City Chiefs player who has had "similar" issues reported in the past.

For so long, people claimed Larry Johnson was a bad apple without much evidence and now it's tough to disagree with those accusations if this recent incident report turns out to be, for the most part, true.

Terrible judgement by a player who is becoming more reckless by the week, in his words and his actions.