Share All sharing options for: Nobody Can Find a Silver Lining to Yesterday's Loss by the Chiefs 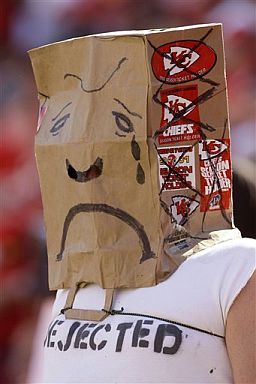 The fires of discontent burn not only here but all around the Kansas City Chiefs blogosphere. Here's what everyone else is saying about yesterday's blowout loss to the Titans.

"It is time for something to change (for now I’m strickly talking about the defensive side of the ball only) and that may start with Gunther. I really like the fire Gunther can (or used to) bring, but as one caller on the post game show said yesterday, the only thing Gunther seems good at anymore is his ability to use curse words.

Even for the hardcore supportive fans, is it time to ask for people’s heads?"

I'm in no way a "Fire Him!" type of fan after each loss. But I will say that each week seems to convince me a little bit more that a big time coaching staff shake up would help jolt the Chiefs back into a competitive mode. Maybe Gunther Cunningham. Probably Mike Priefer, the special teams coach.

Here’s a thought…Imagine what this team will be like the next couple of years if Herm, Bill and CP were wrong? What if they are wrong about what these players will be in 2-3 years? I’m getting a little nervous. Are you? This is getting bad. Real bad. I admit rebuilding is tough and hard for all, but to get embarrassed as the Chiefs have the past two games is something else.

Wow, I don't even want to think about that scenario. Not right now at least. The fact that this is only the beginning or even middle of this losing charade is too much for me to acknowledge right now.

"We didn’t get shut out again," Thigpen said, "so that was really nice."

He wasn’t being sarcastic when he said that. He was serious, and that’s the kind of thing the Chiefs might have to take pride in as they continue what is shaping up to be the worst season in franchise history.

I predict this will turn out to be the worst season in franchise history. The state of the team, the dim prospects for the future and the overall demeanor of failure spells doom for the Chiefs in '08. I still can't believe Thigpen said that. It's so sad that a player can even publicly say that without any public repercussions.

It was without a doubt, the saddest sight of a very sad day of football for the Chiefs.

Just outside the team’s locker room are double-doors that lead down the tunnel at the 50-yard line and out to the field. Just before half-time, those double doors opened and Brodie Croyle limped through with a doctor and a trainer at his side.

Tears were streaming down his face.

Man, I feel bad for Brodie Croyle after reading that. Here's a guy who has probably wanted to play professional football for his entire life, gets his big chance and can't stay healthy. It's sad to hear that about any player. The guy is 25-years old and likely , over the next couple of years, have to find a completely new line of work. That's rough for anyone, let alone for someone with such a specialized skill as throwing a football.