Share All sharing options for: The Chiefs Can't Stop Won't Stop the Run 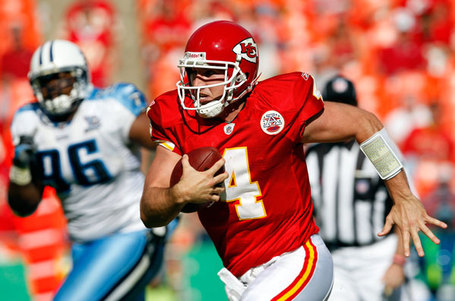 Not much to say this morning. I'm still getting back in the groove but I was able to catch yesterday's "game" by the Kansas City Chiefs. Here are a couple of tidbits from yesterday.

By far the biggest story to come out of yesterday's game was the knee injury of Brodie Croyle, which will sideline him for the rest of the year and presumably he will not start another NFL football game for the Kansas City Chiefs. Croyle has let down the team with injuries far too often in his short career and this one has to be the final straw.

See you later Brodie Croyle. I always had a sneaking suspicion you would never last and it turns out that suspicion was correct.

We may not win four games this year

Looking at the rest of the schedule, it's doubtful the 2008 Chiefs top or even tie last year's team in wins. The rest of the schedule isn't particularly daunting but the Chiefs have failed miserably in virtually every game this year. Even in the Bronco game we definitely got our share of breaks to get that win.

So, are we going with the two-man QB attack of Damon Huard and Tyler Thigpen for the rest of the year? Judging by yesterday's performance, I don't even think Huard wants to be in the games. He needs some help on his acting jobs when a defensive player gets within three feet of him. It seems like he's faking those soccer injuries out there.

My Thigpen jersey is in the mail. All Hail Tyler Thigpen.