The State Of The Kansas City Chiefs Linebackers

Share All sharing options for: The State Of The Kansas City Chiefs Linebackers 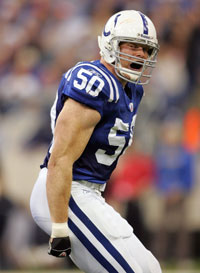 Boiman entered the league in 2002 as a 4th round draft choice by the Tennessee Titans.  His first four seasons were uneventful most seeing time on special teams.  Prior to the 2006 season he signed a 3-year deal with the Dallas Cowboys but was subsequently released the week before the season.  That led to his next stop, Indianapolis, where he enjoyed the most success.  He appeared in every game for two years getting a Super Bowl ring in 2006.

He was not resigned by the Colts but instead picked up by Philadelphia prior to the 2008 season.  Boiman was again cut the week before the season started and sent to the free agent list where he was sitting until the Chiefs signed him today.

Outlook: Boiman looks to be somewhat promising.  He spent two years in Indy getting a decent amount of playing time so he'll get his shot this season.

Dacus saw time in all four of his years at Arkansas spending the last two as a starter.  He was an undrafted free agent signed by the Chiefs prior to the 2008 season.

Dacus is 6'1" 230 lbs. and has appeared in two games for the Chiefs this season.

Outlook: Eh...he's got the makings of a practice squad or career reserve.  Nothing to get excited about.

Edwards was drafted by the Chiefs in 1996 as a fourth rounder.  He enjoyed immense success in Kansas City until we let him leave as a free agent in 2002 where he signed with the San Diego Chargers and had a Pro Bowl appearance.

Edwards is currently battling an injury.

Outlook: Not so good.  He's on the downside of his career, possibly facing the end of it at the conclusion of the 2008 season.

Outlook: In KC for the foreseeable future.

He's seen enough action at MLB this season to warrant a roster spot in a reserve role.  But his (and others) lack of production in the MLB spot is becoming an increasing problem in KC.  Expect this position to be addressed prior to the 2009 season.

Outlook: Reserve role.  A starting MLB should be in place or in the system by 2009.

Walden was selected by the Cowboys in the 2008 draft.  The team later released him during final cuts.  Both sides were hoping he would clear waivers in order to sign onto the practice squad (because players actually want to stay in Dallas) but Kansas City's 2007 abysmal record helped them snag Walden before many other teams had a shot.

He played at a small school (Mid Tenn State) as a defensive end and showed an ability to get to the passer.

Outlook: I'm interested in giving Walden more time considering he switched positions upon entering the pros.  He was able to get to the passer in college something the Chiefs desperately need to do.

Outlook: Williams hasn't been outstanding (but who has?) and should see a roster spot in 2009 pending a major upgrade on the right side.