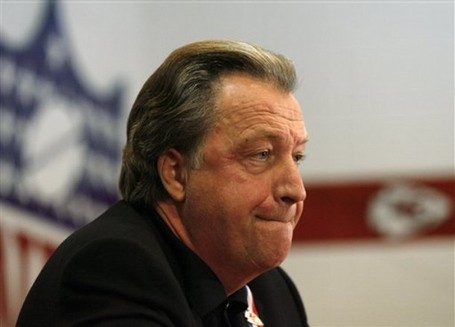 What's left to be said. The Chiefs are stuck in the lowest grade of rebuilding that's even possible. And you decided to hold onto a player who, for all his eminent talents and place in history, will ultimately not do this franchise any good.

I had mentioned in an earlier entry, breaking down Gonzalez's worth, that he was worth about a 3rd at best, or a 4th and an additional low-rounder. Not to toot my own horn or anything, but there are multiple reports out there that that's exactly what you were offered. And you decided that instead of allowing Kuharich and Herm -- the masterminds behind a pretty strong 2008 draft for this team -- a chance at some good talent in the 3rd or to mine for talent in the mid-rounds and low-rounds, that you were going to sit on your hands and let Gonzalez wallow.

Leadership? What good does that do you when you're a Bottom 5 team? Groom young leaders, don't depend on your old leaders 'til death do you part.

For what? The emotional punch of Tony finishing his career with an arrowhead on his helmet? Why don't we create new legacies instead of depending on beloved, old ones?

To sell tickets? I don't know where you got the idea that Gonzalez was the only Chiefs player that fans love seeing.

The reliable target in the middle of the field? Sure, Tony's presence on the field cannot be replaced, but this team doesn't need to replace him this season. We're not going anywhere this season, Carl.

Your fanbase has accepted that. You can't, and I don't know why.

And you know where we're at because of this stalling pattern? We have a disgruntled star displeased with our youth movement who is blabbing all over any media outlet who will listen to leverage popular opinion against Carl Peterson and the rest of the Chiefs' front office. We're holding him hostage in a high-profile staredown with several other regimes across the NFL, decreasing the chance that anybody anywhere will blink.

If that sounds familiar to us, it's because that was the Trent Green hostage situation from a year and a half ago. You miraculously succeeded there, but that's largely because you were dealing with a completely incompetent administration.

No sir, in this situation, asking for a 2nd for a 32-year-old who can't help us makes you the incompetent administration. And you are becoming increasingly exposed.

In the grand scheme of things, this isn't a monumental mistake, but it is significant because it illustrates your consistent modus operandi that has punished this franchise far more frequently than not.

Your time with this team, and the NFL, is running out.